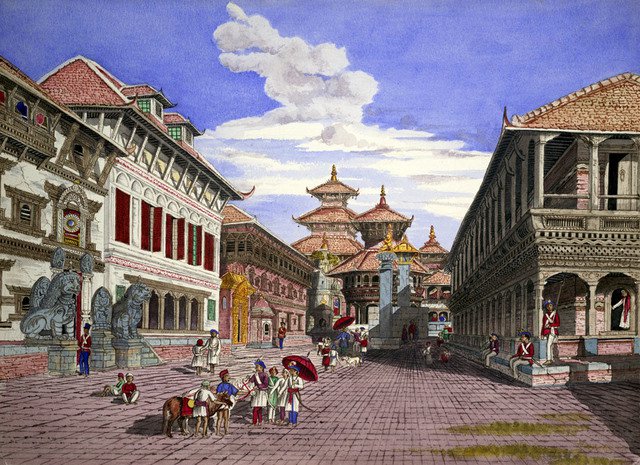 “This younger brother (Ananda Malla,) being very generous and wise, gave up the sovereignty over the two cities, and having invoked Annapurna Devi from Kasi founded a city of 12,000 houses which he named Bhaktapur(Bhatgaon) and included sixty small village in his territory. After this, the Raja having obtained the favour and directions of Chandeswari, founded seven towns; viz. Banepur(Banepa) near Chandeswari Pitha, Panavati(Panauti), near the Pragaya Tirtha of Nepal, celebrated in the Shastras on the site where Panchala-des formerly stood, Nala, near Nala Bhagavati, Dhaukhle near Narayana; Khapu near Dhaneswaril Chaukot near the residence of Chankora Rishi; Sanga near Nasika Pitha.”

The above extract is from the Newar Chronicle, also known as The History of The Kingdom of Nepal, compiled by Daniel Wright in the 19th century. It gives us a clear account of the establishment of a great empire by King Ananda Malla. The centre of his seat of power was Khwopa, also known as Bhatgaon and Bhaktapur.

The region featured numerous settlements before King Malla's expanse as per various historical sources. One account states Khopring, meaning 'rice village', which existed in the eastern part of the valley. Linguists suggest derivated to Khowpa. Later in the Lichhavi Era, this settlement was known as khopring grama. The sources of these facts are three stone inscriptions recovered from the region of Bhaktapur. The oldest is from 594 AD. Historians state that this is barely the tip of the iceberg. If we conduct more archaeological projects, they will yield more of these inscriptions which will help us understand the region's history, lifestyle and structure.

The city features other names, such as Bhaktapura, found in an inscription from 928 AD. A manuscript dating 1004 AD refers to this city as Khwopu. The Gopal Raj Vamshavali (Chronicle), written in the 14th century, mentions Khwopa, Khwopu and Swopa. Historians state that Khwopa is a derivative of the word Khopring used by the Malla Dynasty to identify the city. The word Bhadgaon came into use after the conquest of Prithivi Narayan Shah. Bhatgaon is a Khas translation of Bhaktagrama. Some Historians differ- they state that Bhatgaon is the Khas translation of Khopring as it means rice village. It was only after the 1930's the word Bhaktapur became popular. Bhaktapur meaning "city of devotees", was tagged to this region due to the sheer number of temples and people's devotion. Historians credit Juddha Sumsher Rana as the inceptor of the word Bhaktapur. Historians assume his inspiration was the Sanskrit identification of the valley during the 2nd century- Bhaktapura.

In the next part of this article, we shall explore more of the history and culture of Bhaktapur!